Active involvement in a federal electoral campaign, Spanish exam means that Peruvian elections took a bit of a backseat. But at any rate, the first round of general elections were held in Peru on April 10, 2011. I had covered the basics of Peruvian politics and the who’s who of this election in a preview post. Counting is quite slow, but I’m tired of waiting on the ONPE, so here are quasi-final results for the presidential ballot, with 95-98% or so counted. Six other jokers are not included here, none polling over 0.31%. 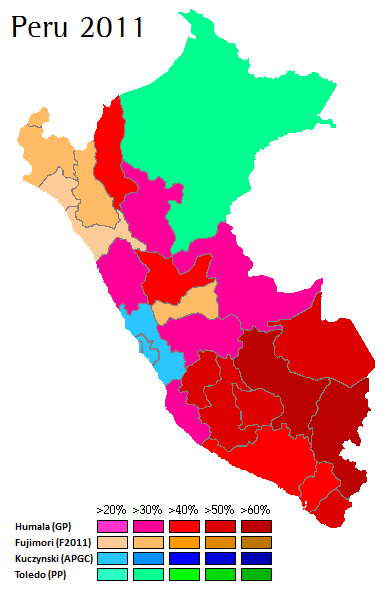 Humala and Keiko will fight off in a runoff on June 5. Nobel laureate Mario Vargas Llosa, who lost to Keiko’s father in 1990, has described this kind of runoff as a choice between “AIDS and terminal cancer”. His opinion is probably quite reflective of the centre-right, urban middle-classes of Peru who dislike Fujimori’s right-authoritarian-populism and loathe Humala’s left-wing ethnic nationalism.

This fascinating election has had roughly four frontrunners since it kicked off in 2010. First, the race was a straight fight between Keiko and Castañeda with Toledo and Humala placing in distant third or fourth and PPK barely registering. In late 2010, Toledo moved ahead of the field and peaked at 30% support in Februrary while Keiko and Castañeda fought for second. In March, Toledo’s support slid back down to 20% while Humala and PPK began their surge. Castañeda lost speed, while Keiko maintained herself. In the final weeks, Humala surged ahead with Toledo, Keiko and PPK in a virtual tie for second place before Toledo slid further down and Keiko solidified her second place. Castañeda, meanwhile, collapsed. In all of this back-and-forth contest, Keiko was the only candidate to maintain her support. Polling 19-22% in January 2010, she finished at 23.5%. No other candidate maintained his support and either moved up or down by a significant amount. Keiko’s remarkably solid and tight voting base means that she has a very solid base behind her, which isn’t surprising given that she’s a very love-hate figure (like Humala). As noted in my preview post, Keiko had 18% rock-solid support from voters a week ago (the second highest of all candidates) and Humala had a 24% rock-solid base (the highest). But at the same time, Keiko and Humala also have a 40-41% rock-solid base of non-support. This means that the upcoming runoff will be very interesting.

Ollanta Humala’s base of support was in the Quechua (and Aymara in parts) heartlands of the inland sierra region of Peru. Humala broke 60% in Cusco and Puno and 50% in surrounding regions of the Quechua heartland. His support is basically an ethnic map, with a vast majority of his voters being Quechua and getting lesser support from other native groups. His support is significantly lower along the whiter and wealthier coastal areas.

Keiko Fujimori’s base is predominantly in northwestern Peru, including the Aprista bastion of La Libertad. She did, however, do well throughout the interior (outside Humala’s Quechua homeland) and did decently in Lima and Callao. Keiko’s fujimorista support seems to be drawn largely from poorer voters, often living inland, but not necessarily from natives. These voters likely have good memories of papa Fujimori who brought them security in regions where the Shining Path rebels wreaked havoc. Her support does not exactly reflect the zones of Shining Path activity, but it is overall a pretty good guide. In the traditionally Aprista-areas of La Libertad and northwestern coastal Peru, her support is probably largely mestizo and drawn, again, from poorer voters who voted for her as the most populist of all candidates against an ethnic left-nationalist (Humala) or centrist/centre-right moderates (the 3 moderates) with whom they likely have little in common.

PPK’s support is overwhelmingly urban, wealthy and by consequence white/mestizo. He did best in Lima and Callao (which he both won) and did well in Arequipa (Peru’s second largest city) and other regions which include a major city. In Lima’s upscale neighborhoods of San Isidro or Miraflores, PPK won roughly 57 to 61% of the vote. He also did well with overseas voters, who always tend to be wealthier than the broader electorate. He also did very well (45%) in Barranco, Lima’s bohemian neighborhood.

Toledo won Loreto, the largest but extremely sparsely populated region in the middle of the jungle. It was won by Humala in 2006, and is largely indigenous but the natives are not Quechua stock (a linguistic map shows that they’re mostly Huitoto-Bora). Toledo was active as an opponent of the 2009 attempt to sell land in the Amazon for oil exploration (which, if you remember, led to the deaths of natives and a few soldiers). Toledo, who is himself of Quechua Ancash ancestry, also did well in his native coastal region of Ancash and other places here and there in northern Peru.

Castañeda broke 20% in his native Lambayeque and 10% in four other regions including Lima and Callao.

The 2006 runoff was pretty bad as it was for Peru’s unlucky middle-class right-wingers. They got to choose between Humala and a failed ex-president who went on to win. But García was pretty moderate and most stomached voting for him pretty well. But in June, people of the Vargas Llosa type (Vargas Llosa himself said he could vote Humala, but never for Keiko), will have to choose between two candidates they probably strongly dislike. It is likely that Keiko will have a slight edge with the business community. Humala will, as in 2006, gobble up much of the inland votes and poll extremely strongly in the Quechua homeland.

Ipsos-Apoyo showed, last week, that a Keiko-Humala runoff was tied 42-42. Unlike in the 2006 runoff, where García always had an edge overall, it is really tough to say who of these two will prevail in June. It won’t depend on turnout because voting is mandatory in Peru, but if a lot of voters cast blank ballots in protest, it could have the same effect as weird turnout has in other elections. Toledo himself seems to have endorsed Humala, while PPK has said that nobody has contacted him though Keiko says that she would like an alliance with him. Given that both candidates have over 50% of voters saying that they would never or probably wouldn’t vote for them, both have ceilings but in such a weird runoffs it remains to be seen if that means anything. Humala’s ceiling was quite low in 2006 when he was seen as the Chavist ultra-nationalist nut. But Humala acting as the Peruvian version of Lula “peace and love” (some claim Humala’s campaign is financed by the PT) might mean that he has a higher ceiling. It will be an amusing and interesting runoff contest, and certainly something which I can’t personally predict.

Congressional results are not fully counted yet, but El Comercio has these results thus far:

Humala’s gang is roughly at their 2006 levels (46 seats) and APRA loses 32 of their 36 2006 seats. The Fujimoris had 13 or so seats in 2006, while Toledo’s gang had 2 back then. Congressional results are pretty worthless overall and can’t be compared to anything. Their outcome often mirrors, more or less, the presidential election and the ephemeral coalitions of the day. But it does mean, again, that no president will have a majority with only his coalition, though if individual members are like Brazilian congressmen, they can be bought at discount. The Congress would matter most if Humala won, given that he wishes to change the constitution (which is currently the 1993 Fujimori document).

The Andean Parliament probably will split 2 for Humala’s gang, and one seat each for Fuerza 2011, Peru Posible and PPK’s grouping.