Bolivia, South America’s poorest country, held a general election on December 6 to elect the country’s President, as well as 130 members of the Chamber of Deputies and 36 Senators. This is the first election since the adoption of a new constitution in mid-January 2009.

Bolivia, a poor landlocked country in South America, is unique in that it has a large indigenous population, mostly Aymara and Quechua. Despite this, power and influence in Bolivian politics and economic activities (historically mining, but nowadays exploration of the country’s large natural gas reserves in the main economic activity) has laid in the hands of a small, educated European or Mestizo elite. Since independence in 1825 and until 2005, none of the country’s Presidents have been fully indigenous. In recent years, the elite pushed through aggressive economic reforms aimed at liberalizing the country’s economy. Under the direction of President Gonzalo Sánchez de Lozada, foreign investors gained control of Bolivia’s major corporations including its natural gas corporations. In addition, Lozada and his successor, former military strongman Hugo Banzer, both led an aggressive policy against coca-growing farmers, mostly indigenous Bolivians. The neoliberal policies espoused by Lozada and his government were strongly contested by the indigenous majority and the left, notably union leader Evo Morales. Gas conflicts broke out in 2003 and 2005, leading to violence and the resignation in 2005 of President Carlos Mesa (who had succeeded Lozada after his resignation in the midst of the 2003 gas wars) and early general elections in 2005.

Evo Morales, an indigenous socialist trade union leader won the 2005 election with 54% of the vote by the first round, trouncing his closest rival, former right-wing President Jorge Quiroga of the right-wing PODEMOS party by roughly 25%. Morales overturned the privatizations of the previous right-wing governments, and nationalized Bolivia’s gas companies in March 2006 and spearheaded the passage of a new constitution giving more rights to indigenous Bolivians in 2008-2009. His presidency saw the rise of stark political differences between the country’s mountainous and indigenous west and the mineral-rich mestizo east – notably the wealthy department of Santa Cruz. The opposition failed to remove him from power in a 2008 recall vote (he won 67%)  and they then attempted to pass autonomy referendums which Morales deemed illegal.

Under his new constitution, Morales was allowed immediate re-election and will also be able to run again in 2014, since the constitution does not recognize previous terms served under the old constitution as term limits. Evo Morales and his party, the Movement Towards Socialism (MAS) holds a majority in the Chamber of Deputies but lacks a majority in the Senate. In this election, he notably faced Manfred Reyes Villa, a known opponent of Morales on the right a former prefect of Cochabamba, before being recalled in 2008 (Cochabamba is a largely indigenous state, thus opposed to Villa’s right-wing politics). His coalition gathers most of Bolivia’s old political parties, who lost power with Morales’ election in 2005. Morales led in all polls, and his victory was so certain that Villa allegedly bought plane tickets for the United States for December 7. Judging by the results, he made a good choice.

Results with 96.2% reporting, according to the CNE’s applet. 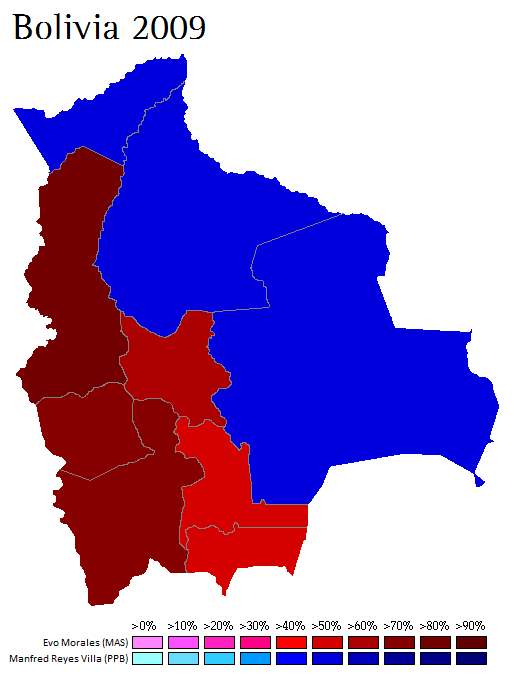 The map highlights the stark division between east and west in Bolivian politics. Despite getting trounced, Morales’ right-wing opposition managed strong victories in three departments, their strongholds of Santa Cruz, Beni and Pando. On the other hand, Morales won over 70% in Potosí and Oruro and broke 80% in La Paz. Cochabamba, the home department of Reyes Villa gave over 60% of the vote to Morales (and only 27% to Reyes Villa). It is obvious that the wealthier and whiter east will continue to be a strong base of the opposition during Morales’ second term.

According to Bolivian news sources, the MAS has won a two-thirds majority in Senate and a strong majority (though probably not two-thirds) in the Chamber of Deputies – now elected solely by FPTP. A two-thirds majority gives Morales and his party increased power, including power to change the constitution.

Morales may find his second term more difficult than his first, as he now has the responsibility of delivering results and royalties to his constituents as a result of the 2006 nationalization of Bolivia’s gas resources. However, with the support of a majority of Bolivians and a large majority of legislators, he maintains a largely free hand in the new system of Bolivian politics.

Two referendums were held in Bolivia last Sunday, and the CNE has counted around 99.98% of the votes, so here are the results. Turnout was around 90% with the CNE reporting that 3,511,493 voters cast a ballot.

The first referendum was on Morales’ new pro-indigenous constitution

The second referendum limits the legal size of private property to 5,000 hectares instead of 10,000 hectares.

Here is a map of the first referendum, to show the clear division between the east and west in Bolivian politics. 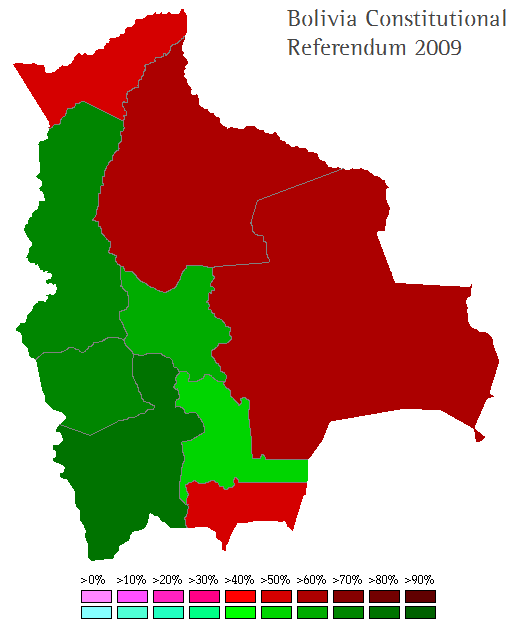 The constitution passed overwhelmingly in the mountainous indigenous and poorer regions of western Bolivia, the traditional stronghold of Evo Morales and his party, MAS. Western Bolivia’s economy is heavily dependent on mining. In the mestizo-majority east, flatter and wealthier, the constitution was heavily defeated. The east accounts for about 42% of Bolivia’s GDP and is generally the stronghold of Bolivia’s right-wing (it voted for Quiroga in 2005 against Morales and the right-wing PODEMOS does best here).