This snap election came after a September 20 vote of no-confidence in Prime Minister Borut Pahor’s Social Democratic (SD) government. Pahor’s SD had won the 2008 legislative elections and had formed a coalition with the social liberal Zares, Liberal Democracy (LDS) and the Pensioners Party (DeSUS). DeSUS left the government in April and Zares left the government in July, placing Pahor’s cabinet in minority.

Like most post-communist states, Slovene politics could still be considered in a state of flux. Following independence, the country was more or less dominated until 2004 by the LDS, led by Janez Drnovšek for most of that time. In 2004, the LDS was defeated by Janez Janša’s conservative Slovenian Democratic Party (SDS), which had originally been a moderate social democratic party (known as the Social Democratic Party) but which had shifted to the right pretty dramatically under Janša’s leadership. Following its defeat, LDS disintegrated into factional warfare which strengthened the hand of the Social Democrats (the reformed ex-communists), led by Borut Pahor who had taken the SDs on a moderate, pragmatic progressive path abandoning the more hard-line left-wing positions of the past. In 2008, Pahor defeated Janša and formed a coalition with Zares, a social liberal splinter of LDS led by Gregor Golobič, LDS and DeSUS (which had also been in Janša’s right-wing government).

The main opposition is the SDS, led by Janša, who has been hurt since 2008 by a bribery scandal in which he is accussed of having received bribes from a Finnish weapons company. Besides the SDS, the other parties on the right is the agrarian conservative Slovenian People’s Party (SLS), the conservative New Slovenia (NSi) and the far-right Slovenian National Party (SNS).

With the 2008 elections, we could have thought that Slovenian politics would realign and stabilize around a left-right system opposing SD and SDS, with a smaller centrist liberal faction including a much-weakened LDS and a rump of parties to SDS’s right. The 2009 EU elections seemed to confirm that, although SD with some 19% had done quite poorly compared to a year prior (30%). Apparently that was not quite the case. Pahor’s government has been faced by the economic crisis, which has affected Slovenia pretty badly. Economic growth was just 1.2% in 2010, after receding by 7.8% in 2009. Unemployment is 12%, and the country’s debt has gone from 23% to 43% in the space of two years. Pahor’s government has struggled in the face of the country’s battered economy and a turbulent government hurt by corruption allegations involving the leaders of Zares and LDS. In June, the government lost a referendum on pension reforms which would have increased the retirement age to 65.

The opposition SDS remained ahead in the polls for 2011 and the bulk of the campaign, with Janša apparently unscarred by the corruption cases. SDS promised ‘urgent austerity’ including public spending cuts, tax breaks and pension reform. The campaign was marked by two new parties. The first one is Positive Slovenia (LZJ-PS) led by Ljubljana mayor Zoran Janković, who is considered centre-left. His party promises a ‘a safe and successful welfare state’, which he says entails a balanced budget, 4% economic growth, tax cuts for job-creating investments and a 1% hike in the VAT to 21%. The other new party was Gregor Virant’s Civic List, led by former cabinet minister Gregor Virant. Virant focuses on trimming the state at all levels, reducing public expenditure in an ‘intelligent way’, fighting red-tape and white-collar crime and developing e-government. 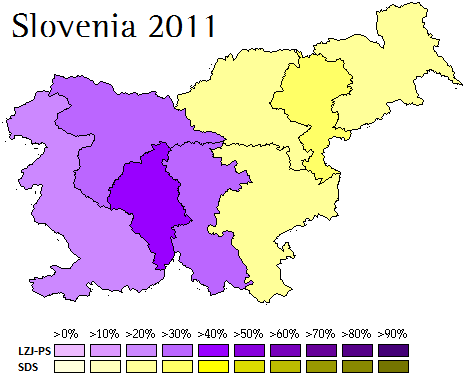 I have a hard time recalling an election which was so surprisingly unexpected in its outcome. All the final polls and most observers had predicted, based on those polls, that SDS would win pretty easily with up to 30% of the vote with Zoran Janković’s party placing in a more or less strong second behind SDS. In reality, LZJ-PS surged pretty much out of nowhere on election day to win a plurality and beat SDS for first place. My uninformed first hunch would be that SDS was hurt more than expected by the Janša-Patria scandal, though I have no idea how true that is.

LZJ-PS pretty much replaced Pahor’s Social Democrats as the main force on the left and they probably took most of those 20% who had voted SD in 2008 but abandoned the sinking ship this year. Rather unsurprisingly, they did best where SD had done best in 2008 (the map has an amusing east-west divide, masking in part a more marked rural-urban divide). They also took some significant support from Zares and maybe LDS, although part of the liberal vote also flowed in part to Virant’s new party. Zoran Janković also benefited from both his wealth and his popularity, especially in Ljubljana. He seems to represent a popular disillusion with both Pahor and Janša, the two main political leaders in the country since 2004. A good number of Slovenians no longer seem to trust either of them in the wake of the economic crisis. A lot of LZJ-PS’ victory by a narrow margin over the SDS probably hinged quite heavily on the Slovenian capital, where LZJ-PS did very well (about 40%) and where turnout was also heaviest.

The governing parties, except DeSUS (probably a sign of the party’s stable core electorate) all took a thumping. The Social Democrats, which had more or less given up, managed to only take a thumping instead of an avalanche wipe off the face of the earth as earlier polls had predicted. They’re now, more or less, back at their original levels of the 1990s as the post-communist party. Zares, which was wiped off the map very badly, has been in free fall since 2009 when the party’s leader Gregor Golobič was involved in a scandal concerning his investments in a company. A shift towards some type of progressive left party on its part did not solve matters. The LDS, whose leader is also involved in a corruption case, could be considered as dead after failing to stop its ongoing bleeding since 2004. The far-right, interestingly, was also wiped off.

Zoran Janković will have to abandon his mayoral office if he is to become Prime Minister. At any rate, the poor relations between Janković and Janša seems to preclude any grand coalition of LZJ and SDS. A coalition with SD falls short of a majority, and a LZJ-SD-Pensioners coalition is also short. Only some of sort of coalition with SD and Virant’s party could feasibly work out, but I have no ideas if such an option is realistic. Fresh elections should not be ruled out.

I hope to have finished posts on Croatia, Russia, Egypt and a by-election in Quebec (Bonaventure) by the end of the week, time depending.

Posted on December 5, 2011, in Slovenia. Bookmark the permalink. 2 Comments.