Hamburg held a snap election for its 121-seat Parliament, the Bürgerschaft on February 20. The last election had been held in 2008, and resulted in the first ever black-green (CDU-Green) coalition at the state level. Relations between the CDU and the Greens progressively worsened and got really sour following the retirement of popular CDU mayor Ole von Beust in favour of Christoph Ahlhaus. The CDU-Green coalition was finally dissolved in November 2010, making for snap elections this year.

The industrial northern German Hanseatic city-state of Hamburg is a traditional stronghold of the left-wing SPD, governing the city uninterrupted between 1957 and 2001. The SPD won over 50% six times since 1946, peaking at 59% in 1966. In 2001, the CDU’s Ole von Beust managed to form a coalition with a right-wing protest party, the PRO of former judge Roland Schill. Schill’s populist outfit managed 19% and 25 seats in 2001, but collapsed spectacularly to a mere 3.1% in 2004. His party, in the meantime, had split and Schill had been booted from the coalition in 2003 though not before insinuating von Beust was gay in a revenge press conference. Schill has since fled to South America. The CDU won an absolute majority alone in 2004, but lost it in 2008 leading to the black-green coalition. Obviously, Ahlhaus never enjoyed von Beust’s personal popularity and he has further been hurt by the relative unpopularity of Angela Merkel’s federal CDU-FDP coalition. The SPD was led by former labour minister Olaf Scholz. 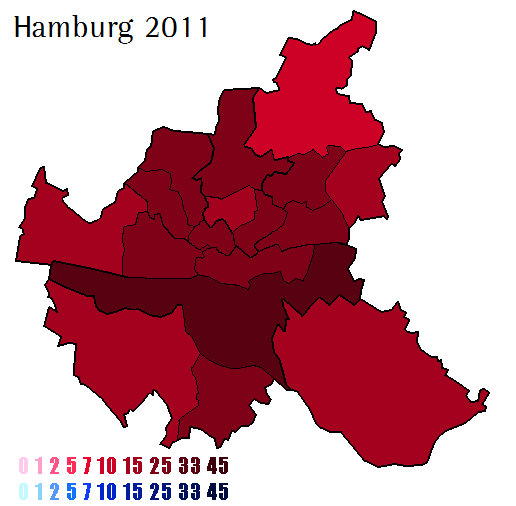 The map is a boring one, the election results are not exciting but they’re quite phenomenal. The SPD has won an unambiguous victory, an outright majority and the best result since 1982. The party’s vote has increased by nearly 15% since the 2008 state elections and by nearly 20% since the 2009 federal elections. This comes at the expense of the CDU, which has won a pitifully low result of 21.9%, its worse showing ever. It lost votes to the SPD, obviously, but also bled a good number of votes to the FDP, which won a surprisingly good result, even entering Parliament, which is good considering the dire straits the FDP is in federally. The Greens have certainly been hurt by their participation in black-green, which means that the Greens will now shriek away from such combinations. Considering how well it is apparently doing federally, a mere improvement of 1.6% over an election which was pretty poor for them (2008) is bad, very bad in fact, for the Greens. They probably bled some votes to the Left, which further cemented its position in Hamburg. The Greens also lost votes to the Pirates, who did well, and the smaller joke party Die PARTEI (The Party). Die PARTEI notably supports rebuilding the Berlin Wall and war against Liechtenstein. Both did well in areas where Greens do well. The SPD easily topped the poll by over 10% in every constituency, with its strongest results in the centre of the city (around the industrial areas in the harbour) while doing poorer in the wealthier suburbs at the extremities of the city which traditionally vote for the right but obviously abandoned the CDU in droves. For example, the gentrified Docklands-like HafenCity in the core of the city saw the CDU vote collapse by 34% (from 62% to 28%) with the SPD improving by 24.3% and the FDP improving its 2008 result by 6%. Such seems to be a good example of where the CDU vote went. The SPD’s top candidate and mayor-elect Olaf Scholz is a Schröderite on the party’s right, which might have helped the SPD considerably in picking up centrist swing voters.

The next elections in Germany are in Saxony-Anhalt on March 20 but the real fun comes on March 27 in Baden-Württemberg, where the Greens hope to form the first ever green-red coalition in a stronghold of the right currently governed by a traditional black-yellow coalition.