The Côte d’Ivoire’s Independent Electoral Commission (CEI), the commission which proclaimed Alassane Ouattara as the winner over incumbent President Laurent Gbagbo with 54% of the vote, released its version of the results of the second round by region. 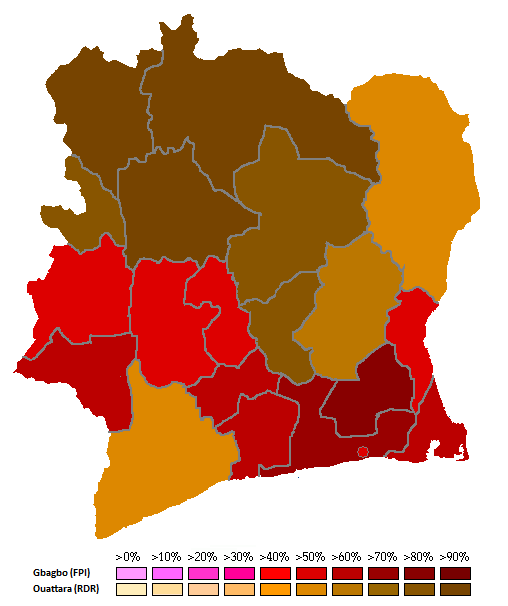 The basic structure of Ivorian politics since 2000 or so is the very apparent north-south divide. The south, fertile and green, is largely Christian. It is the centre of the cocoa and coffee economy which made the country’s fortune until the 1990s. The north – the northwest in particular, is drier and largely Muslim. There has also been important immigration to the northern savannas from Burkina Faso, Mali and Guinea; immigration which has played a major role in Ivorian ethnic tensions since 1994 and have changed the ethnic makeup quite considerably. As in most of West Africa, tribal allegiances are the single most important factors in Ivorian elections. First rounds usually see a very divided vote which candidates representing one or more of the major ethnic groups, while the runoff traditionally sees two candidates (often those backed by the two dominant ethnicities) who build unholy ethnic alliances to win. In Côte d’Ivoire, the Baoulé, the dominant elite under Houphouët-Boigny, backed the Houphouëtiste candidate, Bédié, in the first round but heavily backed Ouattara in the runoff. Ouattara, who had only heavy backing from the Malinkés and Sénoufos in the first round, built an unholy alliance with the Baoulé (and the Yacoubas) to win in the runoff. Gbagbo had backing from pretty much every other ethnic group in both rounds.

Ivorian regions are further subdivided in departments, which often change boundaries, and which are pretty useless. Nonetheless, they are an interesting level for analysis. The CEI did not report results by department in the runoff, instead reporting them through centralized coordinating centres whose boundaries still largely follow departmental boundaries. 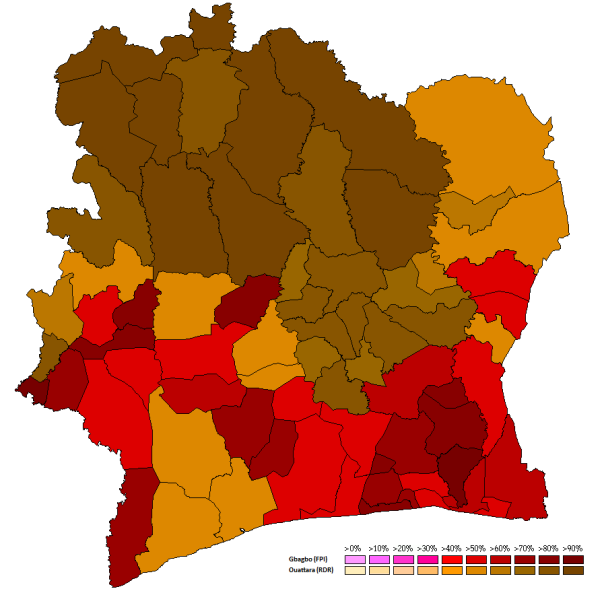 This map shows that reducing Ivorian electoral politics to a nice north-south is quite misleading. The reality is that in Côte d’Ivoire, like in most of former French West Africa, all politics is ethnic and about the alliance of ethnic groups to obtain power. Ouattara had the quasi-unanimous support of the northwestern Malinkés and Sénoufos, which was his original base, and expanded to include strong support in the 65-85% range from the Baoulés (which had backed Bédié in the first round) and the smaller Yacouba minority which backed, as visible here, a small candidate (Albert Mabri) in the first round. Not much should be read into this alliance other than an opportunistic alliance created by two traditionally rival politicians to obtain power and wrestle it from the hands of an opposing ruling class.

On the other hand, Gbagbo obtained the support of most of the country’s other ethnicities. Gbagbo himself is a Bété and in the past he enjoyed strong support, but surprisingly in this election his best results did not come from Bété areas. This could mean that Gbagbo once in power distanced himself from his traditional clan, or that mixing of ethnicities in the south (but not in the north) brought about by a very extensive Baoulé migration from their heartland in the Lacs and N’zi Comoé region to other regions of the country (notably Bas-Sassandra, the only coastal region won by Ouattara, which had backed Bédié in the first round) have served to muddle up traditional ethnic lines. Ironically, Gbagbo’s strongest support seems to have come from ethnicities akin to the Baoulé (an Akan tribe) such as the Agnis and Attiés which are concentrated in the Lagunes, Agneby and Comoé regions. I don’t know much about inter-Akan family relations, but one could realistically assume that the Agnis and Attiés have felt alienated from the Baoulé due to the latter’s omnipotence in Ivorian politics in the past. Gbagbo also performed strongly amongst ethnicities akin to the Bété (in the Kru family), notably the Wés south of Man in the west.

Abidjan, like most major African cities, has been extensively affected by internal migrations of various ethnicities. In the end, Gbagbo very narrowly won the city with roughly 51% against 49% for Ouattara. It should not be surprising that such ethnic mash-up cities end up being the focal points of riots, conflicts and sometimes civil wars in Africa.