Venezuela held general legislative elections on September 26. Venezuela’s unicameral 165-seat National Assembly is elected through a sort of mixed-member proportional representation, with 70% or 110 seats elected in single or multi-member constituencies (of which there are 87) with the remaining 52 elected on a party list system in each state, with each state having either two or three representatives depending on population. The most confusing aspect of the electoral system is the FPTP constituency aspect, given that some of these seats are elected in single-member traditional FPTP constituencies while others are elected in two or three-member constituencies where each party usually nominates two or three candidates and where voters have the choice to split their votes or vote for both, but most often vote “straight ballot”. This system allows for parties with a strong machine to have a shot at winning all of the constituency’s seat with less than 50% of the vote. Such systems were used in the Deep South during the segregation era and in Venezuela forms exhibit one of Chavez’s toying around with the system. Second exhibit is more straightforward: gerrymandering. The new electoral redistricting for this election has given the countryside – which votes Chavist heavily – more weight than the cities – where the opposition does better. In addition, the actual districts drawn up often tend to pack opposition votes in one or two constituencies where they win 80% of the vote while the other districts elect Chavist members with much thinner majorities. The best examples of such seats are in and around Caracas.

After the highpoint of his 2009 referendum win which allowed him to stick around for a long time, Chavez has fallen quite a bit since then. The economic crisis has affected Venezuela more than one would expect. Inflation is riding at around 30%, public services are in ruins and criminality is rampant, claiming 20,000 lives a year. The government was hit by a series of scandals, and, earlier this year, power cuts.

The opposition had taken the ill-advised decision to boycott the 2005 parliamentary elections, which gave Chavez pull power to pass key legislation and constitutional amendments. Needless to say, the opposition did not repeat the same mistake this year and also took the intelligent step of allying with one another to form a broad opposition coalition against Chavez’ PSUV coalition. This opposition coalition, composed of the various outfits and old parties which broadly oppose Chavez (including the ancient COPEI and AD), is named ‘Coalition of Democratic Unity’ (MUD). 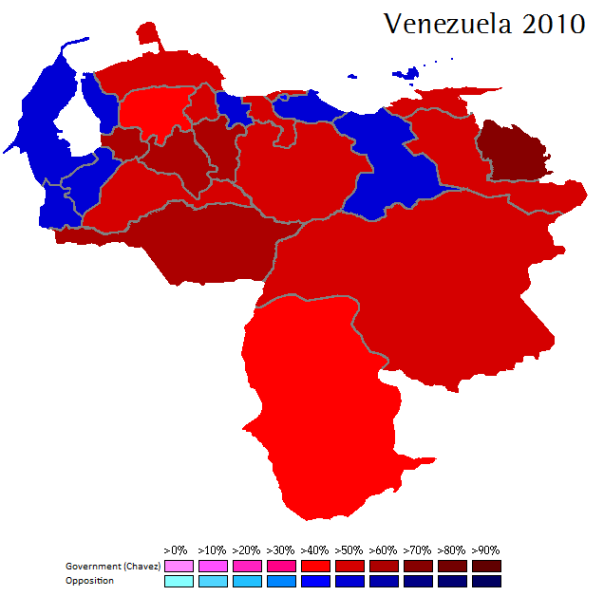 Despite the media claiming this as an important win for Chavez, in an election which was a referendum on Chavez, he did quite poorly. In a gerrymandered electoral system, the popular vote is the indicator which should be used for analysis. Not the seat count. Even on the seat count, the PSUV falls short of two major thresholds: the two-thirds needed to pass constitutional amendments and organic law or the three-fifths needed to pass enabling legislation (though it is only 3 seats or so short of that). Of course, in the seat count, which is what actually matters, Chavez’s PSUV has a comfortable majority, with nearly 60% of the seats. In addition, even though the law says that he should work with the opposition more than in the past, the lessons of the aftermath of the 2008 regionals show us that Chavez won’t be willing to play nice with the “imperialists” in Parliament. Following that election, in which the opposition won several key governorships, Chavez proceeded to cutting state and municipalities of good number of powers. Chavez’s government is also drawing up a plan for sham “communal assemblies” to be controlled from the Presidential Palace itself, something which would strip the legislature of its power. Chavez is a very good strategist and is able to manipulate the system in a lot of ways so that he doesn’t give up power – which he clearly doesn’t want to do.

The seat count numbers above should give a pretty good indication of the extent to which Chavez and the electoral commission (CNE, which is controlled by chavistas) were able to toy around with the electoral system to guarantee him a “48% landslide”. The dictionary entry for Chavist gerrymandering is undoubtedly Miranda, a suburban Caracas opposition stronghold. The opposition won 57% of the vote here, making this key state its second best state after Nueva Esparta. Yet, in the seat count, the result is a 6-6 split between the government and the opposition. Other example in Carabobo, where the opposition took roughly 54% of the vote, but lost on the seat count 4 to 6. In the capital district of Caracas, another fine example of gerrymandering a la Chavez, the opposition took 3 seats to the government’s 7 seats. But the opposition narrowly won the popular vote! In an entirely proportional election, the PSUV would have edged out the MUD by only two seats: 81 to the MUD’s 79 (the PPT would take 5).

The reason I insist on the popular vote count is the role it plays in the run-up to the 2012 presidential election, in which Chavez, of course, is a candidate. If the opposition managed to nearly tie Chavez (or, as some say, beat him when you include the PPT’s 3%) in an election which was a referendum on him, and this despite Chavez’s charismatic appeal and the quasi-full control of the media by chavistas, that is a good sign for their chances in the 2012 election. That being said, Chavez is a formidable campaigner and still has rabble-rousing charisma. He can also count on a rather solid electorate, which is convinced in every election to forget the present and look at the future, and thus keep voting for the government which promises a utopic future.

In Venezuelan elections, at least those under Chavez, there has been a rather stark urban-rural divide. As insinuated earlier, the cities are more favourable to the opposition. The reasons – higher levels of education, wealth and welfare – shouldn’t come as a surprise. The opposition polled some of its best results in the affluent middle-class areas of Caracas, of which a lot are in the state of Miranda. Miranda is one the opposition’s three main traditional strongholds in Venezuela. The second one, which is perhaps most famous in the minds of election nerds, is Zulia, which is also the most populous state and one with an important petroleum industry. Zulia is known to be a state more inclined to private enterprise and free trade than the rest of the region, and also remarks itself for a separate identity and culture than the rest of Venezuela. The relative isolation of the state – the city of Maracaibo has been united to the mainland by a bridge only since the 60s probably contributes to this. The third base of the opposition is Nueva Esparta, which is in fact the opposition’s best state this year. This is an insular state, composed primarily of the island of Margarita, which has become a major tourist resort. The tourism industry (which is private) has contributed in part to the state’s lean towards the opposition, as has the recession and rampant criminality.

To this base of states, the opposition has added the Andean border state of Táchira, which used to lean Chavez’ way but has since swung to the opposition rather heavily. The presence of FARC camps in this state has led to a huge crime rate, which hasn’t gone down to well with voters here. This election, the eastern state of Anzoátegui gave the opposition a surprisingly large victory. It is industrialized and heavily populated, but its governor is a key Chavist and the state in general has not been an opposition stronghold or anything similar. The heavy vote in favour of the opposition here may stem from the unpopularity of the governor, who doesn’t have a great reputation (at least on the internet).

Chavez still has the backing of a big machine, largely composed of unionized workers, the urban poor and the rural poor. These groups are particularly dominant in the llanos of western Venezuela, where Chavez is from. The llano states gave the PSUV some of its best result, and this is no oddity. Furthermore, in a lot of sparsely populated jungle areas out here, the army and various unsavoury paramilitary groups of sort hold much sway. They also control politics.

One oddity this election was Amazonas, the large sparsely populated state in the southern tip of the country. Being isolated, poor and having a large native population, it is one of chavismo’s best states along with the Delta Amacuro (which is similar in demographics to Amazonas). However, this election, you had the PPT, a left-leaning party which broke with Chavez but whose main base is in Lara, win 41.6% of the vote and take 2 of the state’s total 3 seats. While it only won 28.4% in its traditional home base of Lara. Some things don’t change, however, because Amazonas was by far the opposition’s worst state with a mere 14.7% of the vote there.

More ample information on the various states, these elections and their results can be found on two excellent English-language local blogs, the first one being the Venezuela News and Views and the other being the Caracas Chronicles. Both of these come from a very anti-Chavist view, but the analysis is excellent, insightful and also extremely honest.

Posted on September 29, 2010, in Venezuela. Bookmark the permalink. 6 Comments.