The first round of a presidential ballot in Poland was held on Sunday, June 20. This election, originally scheduled for October, was moved up to June following the death of President Lech Kaczyński in a plane crash on April 10. Kaczyński, a founding member of the national-conservative Law and Justice (PiS) had been elected President of Poland in 2005. His brother, Jarosław, served as Prime Minister between 2006 and 2007, but PiS was defeated in the 2007 legislative election. Kaczyński led a markedly eurosceptic policy, resisting pressure to sign the Lisbon Treaty, as well as a socially conservative policy. Indeed, PiS represents a socially conservative but more economically statist-populist current which is strong in rural Poland.

Political lines have moved extremely rapidly in Poland since 1989, with parties disappearing and parties suffering volatile swings back and forth. The post-communist left (the Democratic Left Alliance, SLD), led by President Aleksander Kwaśniewski, ruled Poland between 2001 and 2005 with control over both levels of government. Corruption claimed the life of the Polish left, which now struggles to break 15%, and led to the polarization of the political system, more so after the collapse of the far-right in 2007, between PiS and the Civic Platform, which represents a more liberal (economically) and more urban-bourgeois current. The left won 13.2% of the vote in 2007, an election which saw the collapse of the left-wing populist Samoobrona and socially conservative LPR. Seemingly, only the opportunistic agrarian Polish People’s Party (PSL), which supports the party of power, has weathered the storms.

Following Lech Kaczyński’s death in a plane crash in April, a crash which claimed the lives of numerous Polish parliamentarians and high-ranking politicians as well, the cards for the presidential ballot scheduled for October were shuffled dramatically. Lech Kaczyński was widely expected to run for a second term, but also widely expected to face defeat at the hands of Donald Tusk, Prime Minister, leader of the ruling liberal Civic Platform (PO) and the man defeated by Kaczyński in the 2005 presidential ballot. First, Kaczyński’s tragic death left PiS without a clear candidate, and later Tusk backed out, claiming that he wished to continue as Prime Minister – a position, which, although less high-profile, controls most of the country’s day-to-day politics and policies. Bronisław Komorowski, Marshal of the Sejm and by consequence Acting President, became the PO’s front-runner and easily defeated Radosław Sikorski, Foreign Minister, in Poland’s first presidential primary. It didn’t come as much of a surprise when Jarosław Kaczyński, Lech’s brother, announced his candidacy, potentially hoping to benefit from the wave of grief following his brother’s death. The SLD’s pre-candidate, Jerzy Szmajdziński, was in the plane carrying Lech Kaczyński on April 10, and the SLD scrambled to find a new candidate. Names included former Prime Minister Włodzimierz Cimoszewicz and Kraków mayor Jacek Majchrowski, but Grzegorz Napieralski, the party’s leader, was nominated. Napieralski was a rather stale and uncharismatic figure, but a smart campaign helped him rise from 3% to 13% in polls. Other candidates included perennial candidate Janusz Korwin-Mikke of the libertarian conservative “Liberty and Rule of Law”, former PSL Prime Minister and incumbent Deputy PM Waldemar Pawlak, former Foreign Minister Andrzej Olechowski running as a centrist independent, perennial Samoobrona candidate Andrzej Lepper, former PiS member Marek Jurek for the far-right ‘Right of the Republic’, Bogusław Ziętek for the far-left Labor Party and Kornel Morawiecki. 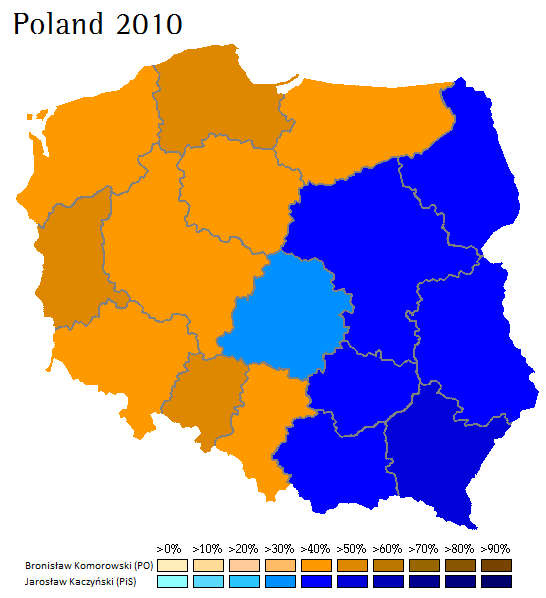 Komorowski could have performed a slight bit better. His 41.54% showing is only 0.03% better than the PO’s 41.51% showing in 2007. The tremendous popularity of Tusk and PO in 2008 seems to have eroded a bit with increasing scandals in government and the recession. But the runoff is still his race to lose. The Polish left having lost its appeal to the working-class, an electorate which largely shifted to PiS, its base is younger and more educated than the traditional European left-wing electorate. Napieralski’s voters will likely hold their noses and vote for Komorowski, whose pro-European and moderate line is the lesser evil to Kaczyński’s aggressive and hard-line conservative line. On the topic of Napieralski, his showing is a relief for the left which has performed respectably well – better than in 2007 and 2009 – despite having, at the outset, a sub-standard candidate. His campaign seems to have paid dividends to his showing, although increased name recognition likely helped. Jarosław Kaczyński’s showing is better than what his party had polled in 2007 -when he was the incumbent Prime Minister – showing either the increased polarization or the transfer of the vast majority of the PSL’s 9% (in 2007) to PiS, which is not surprising given the nature of both parties’ electorates. Perhaps Pawlak’s pathetic showing – 1.8% – will sign the death warrant of the PSL, but such has been predicted in the past and the PSL has stuck around. A presidential ballot is also a bad election for a party whose raison-d’être is more alliance with power than winning power. Lastly, Olechowski, despite being relatively high-profile, suffered from having no machine or media coverage.

Turnout was up around 5 points since 2005, and higher in cities though turnout in rural Galicia was high. Low turnout often helps PiS, whose voters, more elderly and rural, are more likely to turn out than PO’s urban electorate. The PO will hope that turnout will remain high on July 4, the day of the runoff, and that voters won’t suffer from summer fatigue with politics.

% vote for Komorowski by town

The electoral map still eerily resembles a certain historical map of Poland in 1914. Komorowski performed best in PO’s strongholds in formerly German territory in Poland, a victory owing more to the region’s general urbanization and economic modernization than to any historical patterns. He also won Warsaw with over 50% of the vote, though he lost the voivodeship containing it. Kaczyński performed best in the PiS’s strongholds in formerly Russian and Austro-Hungarian territory in Poland, including Galicia, areas which are far more rural and poorer than the west. PO won Gdansk and the Silesian coalfields by a large margin, but it is foolish to look for sense in Polish voting patterns given how many voters vote tactically in a polarized electoral system. The general pattern is more urban vs. rural than German vs. Russian, though of course the similarities are amusing. The Polish Electoral Commission, one of the best in the world, has an interactive results interface in English here and maps by town for each of the candidates are available. A map of Komorowski’s showing is presented on the left here.

Ahead of July 4, polls still show Komorowski as the run-away favourite and he should get the lion’s share of Napieralski’s voters. Kaczyński will be hoping for low turnout (his brother won the 2005 runoff with only 46% turnout) to deliver him a fluke victory. However, some think Kaczyński is using the presidential election to stage him up for a return to parliamentary politics in 2011, as party leader, and in an attempt to become Prime Minister once again. After a likely win by Komorowski, the PO, like the SLD between 2001 and 2005, will control both levers of power. Tusk will overpower Komorowski and could face a simpler route to pass reforms including constitutional reforms strengthening parliament at the expense of the presidency. However, the last time such a ‘full control’ happened, with the SLD between 2001 and 2005, the results were quite bad for the SLD. The PO should beware of history.