As covered in a large preview post only a few days ago, the Netherlands went to the polls to elect the 150 members of the country’s lower house, the Tweede Kamer. The election was held as a result of the collapse of the fourth Balkenende cabinet over the Afghanistan issue. The Netherlands’ very proportional electoral system – which is in effect PR with a threshold of 0.67% for representation allows for the predictable dispersion of voters between a number of parties, sometimes in complete ideological opposition to each other, which tend to represent the various sociological groups present in what is in reality a very diverse society. As a result, the composition of the Dutch Parliament is extremely divided and leads to large and sometimes difficult coalitions.

During the campaign, Prime Minister Balkenende’s CDA, the largest party in 2006, had suffered a polling free fall due to the growing unpopularity of his government and his personal inability to keep it together. This benefited largely the liberal VVD, whose platform and record of being the “deficit cutters” struck a chord with Dutch voters in a campaign largely focused on the economy and the need for budget cuts, an integral part of the VVD’s platform. The CDA and the PvdA, the junior partner which brought government down, also suffered from the growth since 2009 of the populist far-right Freedom Party (PVV) led by Geert Wilders thanks to concern about growing Muslim immigration. While immigration was not the main focus of this election and the PVV wasn’t polling as spectacularly as it had been earlier, it remained a major issue. A rejuvenated PvdA under Amsterdam mayor Job Cohen enjoyed a boost in polls earlier this year, but Cohen’s poor debate performance and his economic inexperience saw the party’s fortunes go down a bit even though he did manage to squish the D66 and GreenLeft and stole their past thunder, that is, vocal opposition to Wilders. Here are the results: 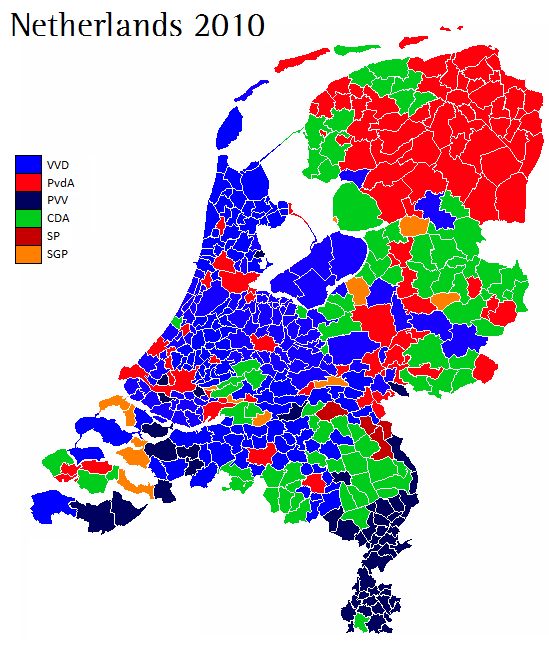 The polls before the vote indicated around 33-34 seats for the VVD, “comfortably” ahead of the PvdA, predicted at 30, the CDA between 23-24 and the PVV with 17-18. What happened is what is locally called the “curtain effect” or the Dutch “Bradley effect”; that is, an underestimation of the PVV’s real strength by pollsters – similar to what had happened in 2009 or 2006 in the Netherlands or in 2002 in France. The PVV’s real strength came at the expense of the VVD, which saw itself practically tied with the PvdA, but also the CDA which fell even further into a pathetic fourth place.

The VVD is the winner of this election, but it is neither an historic victory nor is it a massive victory. In fact, it has only broken 20.4% (it had won 24.7% in 1998) and has only benefited of the division of the vote to come out a narrow first in a rather inconclusive election. The PvdA’s election result is far from surprising and could either be considered as good given that they largely held up despite being junior partners in an unpopular government (and being responsible for a snap election) or could be considered as poor given that this is their second straight election losing seats. Unlike in 2006, however, it did not lose seats to the SP, but rather to the PVV, which is not surprising both given the general likelihood of white working-class voters flirting with the far-right and the tough immigration line taken by both SP and PVV (though the PVV’s is harsher, obviously). Compared to pre-election polls, the PVV had a good election and shows that it can both hold up its 2009 vote and that immigration as a factor in protest voting remains important even in an election not entirely dominated by immigration (unlike 2009). Yet, talks of a “nationalist breakthrough” or whatever the media is saying today misses the point. The PVV’s result is inferior, albeit only slightly, to its 17% result in 2009; and any person who has tracked polling since then will know that the PVV enjoyed a massive upswing during an anti-immigration and anti-politician mood in 2009 and even earlier in 2010. All this isn’t to say that the PVV has reason to be disappointed, but rather that the PVV’s showing isn’t as great as the media would like it to be (perhaps because it wouldn’t fit in entirely with their general doom-and-gloom message). The real loser is obvious, it’s the CDA. A governing party dwindling to fourth is not entirely surprising in the Netherlands, but it remains a major story. The real story is that the CDA, with a ridiculous number of barely 13.7%, has done worse than all mainline “Christian” parties put together in the Netherlands since proportional representation was introduced in 1918 (remembering that the CDA is an amalgamation, created in 1977, of the Catholic KVP and Reformed ARP and CHU). The CDA’s previous absolute low was around 18% in 1998. The SP did respectably, given the low name recognition of their unknown new leader and how their 2006 result was something of an anomaly, and likely shows that the SP can establish itself as a major option for voters disappointed in the PvdA’s recent-ish move towards the centre. It could also benefit from any fall in the PVV’s electoral fortunes (as could the PvdA and VVD). D66 and the GroenLinks, while they have pleasing results, could have hoped for more given their success in 2009 (11.3% and 8.9% respectively), but Job Cohen’s ability to make the liberal voters totally allergic to Wilders – who voted massively for D66 and GL, both vocal opponents of the PVV in 2009 – come back to the PvdA which was able to make itself the largest anti-Wilders pole for the (relatively small) share of voters totally allergic to Wilders’ politics. No comment is necessary for the smaller testimonial parties, who deal with a very well-defined and generally stable electorate, or the Animals Party which lost some votes likely as a result of a minor boost in the GroenLink’s results. One final epic fail was Verdonk’s Trots op Nederlands outfit, which never materialized as the “new LPF” despite posting leads in polls back in 2007-2008. Wilders and the VVD did her in and has ridiculed her electorally.

The NRC has a fun interactive map to play around with here. Below the table of results in this post, you’ll find a simple map showing the largest party in each municipality. Apparently, the VVD has totally dominated in the more urban and wealthier Randstad in Holland. This area, which was split between the CDA (in rural areas) and PvdA (in the urban cores of Amsterdam, the Hague, Rotterdam and Utrecht) in 2006 provided the VVD with its victory in 2010. This shows both a shift in the rural CDA vote to the VVD (also observed in North Brabant and North Holland) and a further boost in the VVD’s historic base in wealthy suburban towns. The PvdA managed to hold on in the more working-class cities of Rotterdam and the Hague despite good VVD results (likely boosted by areas such as Scheveningen in the Hague) and traditional PVV strength in these white working-class areas. The PVV polled 17.8% in the Hague, 19.4% in Rotterdam, 16.4% in Haarlemmermeer (which includes the working-class Amsterdam suburb of Hoofddorp) and 20.5% in Purmerend (another working-class suburb of Amsterdam). The PVV’s best result, though, comes from Wilders’ home province of Limburg: a strongly Catholic province where the CDA usually did very well. However, Limburg tends to favour home-born candidates. The PVV did especially well, often nearing 35%, in towns such as Brunssum in the coal mining towns of south Limburg where the SP won in 2006. Finally, the PVV did well in a traditional PvdA stronghold (and the old stronghold of the Communist Party or NCPN) in the Oldambt with results over 20% in most of this poor area bordering Germany. This poor area of northern Groningen, an old base of the left (and still a base of the left and the weakest region for the VVD), has good soil and has been the base of large farms and exploitation of small poor farmers by large landowners. Voters in this region often “vote with their middle-finger” (explaining the CPN’s, and, now, the PVV’s strength). The eastern Netherlands, which is usually poor (and devoutly religious) as well, but has less of a “big landowner exploiting small farmers” history has lower results for the PVV and VVD (which has little base in this region with few large conurbations and suburbs) and provides the CDA’s only provincial win (Overijssel) and strong area. The CDA’s annihilation by the VVD and CDA in its traditional Catholic bases of North Brabant and Limburg is especially striking. Shockingly, D66 and GroenLinks did best in wealthy liberal urban areas. However, Job Cohen’s popularity in Amsterdam kept the votes for both parties (which were over 20% in 2009) down because the PvdA managed to increase its vote share in the country’s largest city by 5% vis-a-vis 2006. The PvdA won 35% against 16.8% for the VVD, 12.5% for GroenLinks, 11.9% for D66, 9.4% for the PVV, 7.3% for the SP and a pitiful 3.3% for the CDA. Amsterdam’s results are always a stark contrast with the rest of the country, but slightly less so this year. The SGP, a perfect example of a fossilized party in a proportional system, managed to win a number of towns, showing how geographically concentrated its voters are. Its victories are either in orthodox Reformed enclaves (eg; Urk) or the Bible Belt.

With the VVD’s platform including cuts in unemployment insurance, increasing tuition, slashing child care, slashing development aid and so forth, talks will be hard with the PvdA and the left. The PvdA would be indeed suicidal to enter government with a party which will likely take out the sword and cut on every side. A government with the CDA, which will be leaderless now that Balkenende has resigned, is more likely. This could either be a minority relying on support from its left (D66-GL) or the right (PVV). A government including the PVV is also a possibility, and is often played by the media as its scare-tactic. However, the PVV would likely be decimated quite badly in the next election if it does enter government (remember LPF in 2003, FPÖ in 2002) as its (protest) voters would associate it with government and the inevitable decline in said government’s popularity. At any rate, whichever government is formed, I’d place bets that the next election will be before 2014.