Mauritius held a general election for its 69-seat National Assembly on May 5. The UK election on May 6 and other issues made sure that I’d forget this election, but late coverage is better than nothing. Mauritius is a very interesting country, and considered one of Africa’s success stories due to its strong democratic tradition and an economy – which, somewhat uniquely for an island country, is not based on one crop. Mauritius gained independence from the United Kingdom in 1968 and became a republic in 1992, but the island, which was French between 1715 and 1810, maintains a strong French linguistic tradition, the result of an 1810 deal which allowed settlers to keep the French language and criminal law. However, a majority of Mauritians are of Indian origin, the result of massive immigration to the island under British rule to work in sugar cane plantations. Only a minority are Creole, Franco-Mauritian or Sino-Mauritian. The result of this ethnic makeup has been a strong penchant towards communalism, exemplified by the racial divisions of parties but also businesses, employment and so forth. Despite this, ethnic relations have always been peaceful, thereby helping the emergence of Mauritius as a developed, diversified modern economy and major economic and political hub of the southern Indian Ocean – something also helped by stable politics and a democratic tradition inherited from the British.

Stable politics doesn’t mean stable coalitions, however. Elections in Mauritius are often won by coalitions, and these coalitions are dominated by the island’s three main parties. Two of them fight for working-class Indian votes, and one is more multi-communal though it does tend to draw its support from non-Indians. The Mauritian Labour Party (PTr) was founded in 1936 on the model of its British counterpart, and sought independence for the island and various labour rights for Indians then employed in sugar plantations. It is dominated by the Ramgoolam family, of which the nation’s first Prime Minister, Sir Seewoosagur Ramgoolam and current Prime Minister Navin Ramgoolam are the most famous standard-bearers. The PTr’s ally in 2010, but rival in 2005, is the Militant Socialist Movement (MSM), founded in 1983. The MSM, of which incumbent President Sir  Aneerood Jugnauth, the ‘father of the Republic’, is the historical leader, is also a rural-based Indian-dominated party. In opposition to the PTr-MSM alliance this year was the 2005 ally of the MSM, the Mauritian Militant Movement (MMM), founded in 1969 which is a more urban and multi-communal party. Its leader since 1976 has been Paul Bérenger, a Franco-Mauritian, and Bérenger was Prime Minister between 2003 and 2005 at the head of a MMM-MSM coalition, which fell apart this year. This year, the PTr was allied with the MMM and the smaller Mauritian Social Democrat Party (PMSD), the party of the Duval clan (a Creole family), which opposed independence in 1967 (the 1967 elections were won by Sir Seewoosagur Ramgoolam) and traditionally represents the wealthiest of voters, most of them being old Franco-Mauritian plantation owners. The PMSD’s current leader is Xavier-Luc Duval, Vice Prime Minister. This alliance, branded Alliance de l’avenir, was opposed by the MMM-led Alliance du cœur, but also the Muslim (16% of the population) based Mauritian Solidarity Front (FSM), the former Hizbullah (no relation to the Hezbollah). The island of Rodrigues, the largest and most important of the three island dependencies of the main island, has its own political parties. Rodrigues is largely Catholic, white or Creole, which explains its political differences.

The National Assembly has 62 seats elected in 21 multi-member constituency, all of which have 3 seats except a four-seater (Grand River North West and Port Louis West) and a two-seat Rodrigues constituency. The island of Agalega is attached to the 3rd constituency. In addition, in a clear example of the communalist structure of politics, 8 additional seats are distributed (really, appointed by the Supreme Court) to ethnic groups and losing candidates. It is known as the ‘best loser system’. Only 7 of these 8 seats were distributed this time, apparently since neither of the two parties eligible for the eight seat – the FSM and the Rodrigues Movement had a Sino-Mauritian candidate, and the eight seat is given to a Sino-Mauritian. 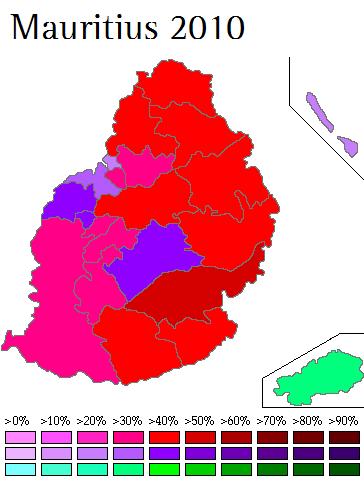 Base map and results map quasi-entirely done by Xahar, a close friend of the editor

The map above shows the percentage vote polled by each party overall, because results are reported by candidates, each voter having three votes. The pattern is quite clear and fits in with the history of each party. The PTr-MSM alliance dominated in rural areas, where a lot of Indians live and historically worked in old sugar plantations, or, since more recently, in small manufacturing industries. The MMM alliance dominated in two areas; the urbanized area around the capital, Port-Louis, and around Beau Bassin. The FSM elected its sole MP in Port Louis Maritime and Port Louis East, and Muslim candidates did well in Port-Louis. The PTr-MSM accused the MMM of going after Muslim votes, which perhaps explains the MMM’s strong performance in Port-Louis. The MMM also won inland around Curepipe and Midlands, which seem to be well-off largely non-Indian areas.