Switzerland held three popular referendums today, including a very controversial vote on a right-wing popular initiative on banning minarets in the country. The measures, supported politically only by the right-wing Swiss People’s Party (SVP) and smaller far-right outfit, was badly trailing in polls up till the vote, but there was a late massive swing in favour of the initiative, which led to a good turnout (53.4%) but a very strong vote in favour of the ban (57.5%). 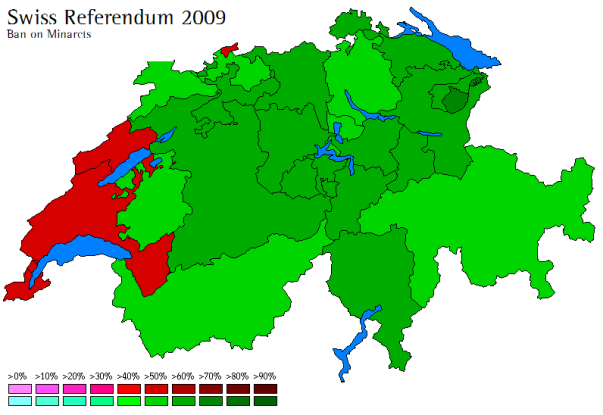 The vote was narrowly rejected in only four cantons: Geneva (with nearly 60% opposed), the liberal Francophone canton of Vaud, Francophone Neuchatel and the urban city of Basel. Although it passed in the canton of Zurich, it was opposed by over 60% of voters in the city of Zurich and similarly opposed in Bern (with around 56% opposed). The Swiss Statistical Office breakdowns the vote by linguistic community: only the Francophones opposed it with 48.3% in favour. The Germans voted 59.7% in favour, and the Italians were massively opposed with 68%.

Really, the opposition to this measure is urban and liberal, as shown by its large rejection in places like Lausanne or Geneva. Rural Switzerland, even the more liberal rural Francophones, voted in favour. The breakdown of the vote shows the support of 54% of voters in urban areas, and 66% support in rural areas. Further breakdown shows the support was lowest in the largest urban centres, with only 39% support, and in wealthy urban areas, with 48% support.

The other interesting ballot measure was a left-wing initiative at banning the export of weapons, the third attempt since 1972 at such a ban. The measure was universally rejected. 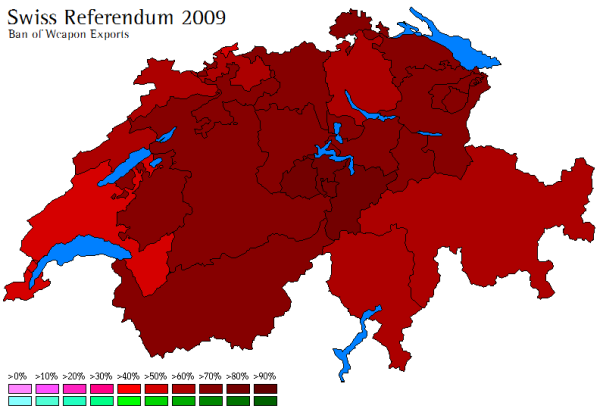 The vote was only close in Geneva, where 48.2% voted in favour of the ban. It even almost broke 60% in the liberal Vaud.

There was a third vote on a measure which will give the revenue of aviation fuel to the aviation sector. It passed with 65% in favour, being rejected only in two mountainous districts of the Valais. Support was obviously lowest in rural areas.

Posted on November 29, 2009, in Referendums, Switzerland. Bookmark the permalink. 2 Comments.