Switzerland held a referendum today on continuing the labour accord with 25 EU states and extending it to the latest two EU members, Bulgaria and Romania. A 2005 referendum on extending the treaty to ten new member states in eastern Europe passed with 56% in favour. The Swiss first approved the labour deal with the 15 old EU member states with 67% in favour. Three of the four “magic formula” parties; the Social Democrats, Free Democrats, and Christian Democrats; were in favour. The right-wing populist and isolationist People’s Party (SVP/UDC) was opposed. Turnout was 50.9%, at par with other Swiss votes. 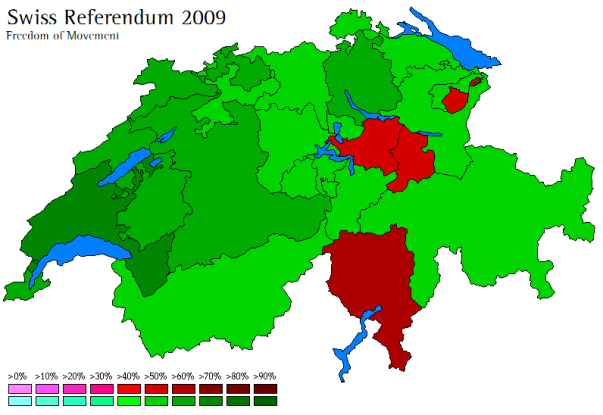 A bit of a linguistic divide that has been seen in other Swiss referendums on similar issues (such as the 2002 UN one). The Francophone cantons out west are the most liberal and pro-European, and have always been. They gave massive majorities to the YES, which even broke 70% in Vaud. The YES also broke 60% in the Francophone half of the Valais, though it also passed with smaller majorities in the German half of the canton. Generally closer results in the German cantons, but it passed with a large majority in Zurich, Bern, Luzern and Basel; the cantons including the top cities of German Switzerland. In Zurich district, the YES received 72% and in Bern, the YES won 74.8% in Bern. Only the very conservative (and SVP stronghold) Schwyz, Glarus, and Appenzell Inner Rhodes voted against for the German cantons. The agreement was massively rejected by the Swiss Italians, the NO broke 60% in Ticino canton (83% Italian). The Italian districts of the Grisons also rejected the agreement by large margins. Ticino is a traditionally conservative and isolationist canton, despite the SVP’s poor results there (a xenophobic regionalist Lega Nord-like party does well in Ticino, 15% or so). The small Romansch minority seems to have voted in favour, based on district results found here.